Bunch of new features for inspections have been released within this release, including showing inspections on a map for the dispatcher, issuing orders, managing inspector qualifications just to name a few. Take a look at the list below for more details.

View inspections on a map

Dispatchers can see a straight line route between inspections when planning on work of the inspectors. This helps them to create a route which is most suitable when considering travel times and distance between inspection sites. If the route needs to be changed, just grab on any inspection box under the inspectors and change the order of them. It is inspector, dispatcher and environmental friendly in many levels!

To see the route, just click the name of the inspector (highlighted in red) or any location on the map - meaning those black circles with letters inside of them. So what are the letters you might ask? Well, they represent the initials of the inspector. Very handy.

Issue an order to comply for an inspection

An order to comply can be issued for an inspection very similarly as adding deficiencies. Every order includes a list of deficiencies and a required action for each of them. The person whom the order is issued to (Applicant, Builder etc) gets an email notification and must acknowledge it in Cloudpermit before anyone can continue working on the project. This process confirms to municipality users that order is actually received and acknowledged.

By the way, "Q" below inspectors' name does not refer to Q in James Bond nor does it stand for "Question". Any idea what it stands for? 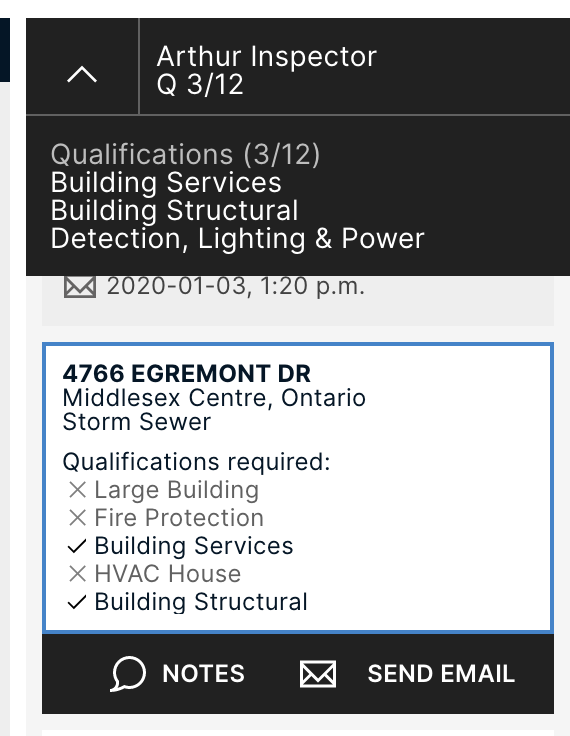 We've also added the possibility to manage (add/change/remove) required qualifications for inspections before the permit issued and after that.

As always, every release includes multiple smaller improvements and fixes for discovered bugs. This time these include: